In December 2018, Hokkaido University Information Initiative Center updated its “interdisciplinary large-scale computer system,” consisting of a supercomputer system and a cloud system, and launched a service based on the new system. The total computing performance of the system as a whole has improved dramatically to 4 petaflops,*1 which is more than 20 times that of the old system. The new system drives the advanced system environment “Hokkaido University High-Performance Inter-Cloud,” which includes a nationwide distributed cloud system extending from Hokkaido to Kyushu, and supports both the Hokkaido University as well as researchers across the nation. 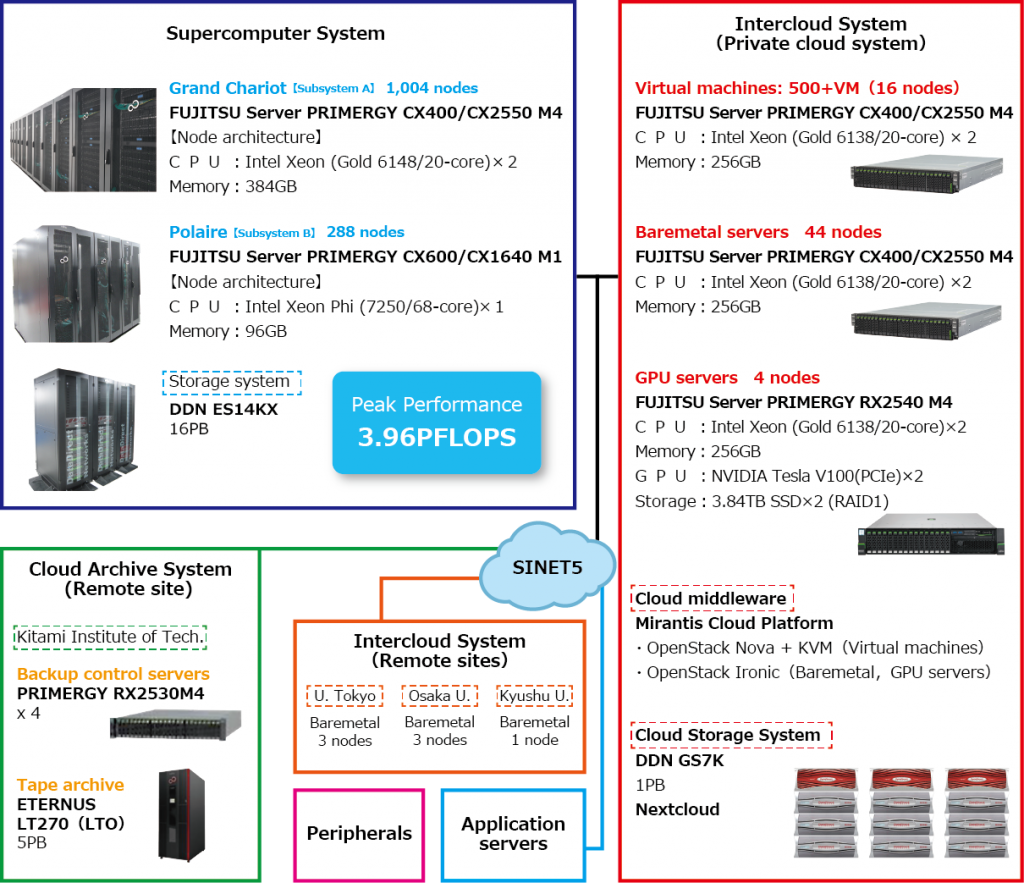 The newly updated supercomputer system has a theoretical computing performance of more than 20 times that of the old system. It is a massively parallel computing system equipped with the latest multicore and many-core processors. This system has a high-performance compiler and a communication library to enable a variety of advanced applications centering on computational science.

Furthermore, it is an enhancement on the old cloud system, “Hokkaido University Academic Cloud,“ and links to the high-performance GPU*2 server*3 installed within Hokkaido University, as well as servers installed at remote sites in Kanto, Kansai and Kyushu, via the super high-speed academic information network SINET5.*4 This setup provides a nationwide distributed cloud system (Inter-Cloud system) extending from Hokkaido to Kyushu. This will support research on networks utilizing SINET5 and research to implement nationwide distributed systems such as IoT.*5

In addition, the establishment of a backup base for data at remote sites in Hokkaido (Kitami Institute of Technology) provides a storage infrastructure that keeps research and other data safely even in the event of a disaster. This system is used for research and development related to computational science and computer science in Hokkaido University, and provides resources for open collaborative research of innovative High Performance Computing Infrastructure (HPCI)*6 and Joint Usage/Research Center for Interdisciplinary Large-scale Information Infrastructures (JHPCN).*7 In addition to academic researchers such as universities, this system will support researchers nationwide including companies and other private institutions. Furthermore, this system can be utilized for education related to computational science, computer science and human resource development, with expected contribution to the development of various fields. With the introduction of this system, the Hokkaido University Information Initiative Center will provide further contribution to society.

*3 Server: A computer for providing a service. In the cloud system, the user can freely construct a research system environment.

*4 SINET5: Abbreviation for Science Information NETwork. It is an information communication network constructed and operated by the National Institute of Informatics (NII) as the academic information infrastructure of universities and research institutes throughout Japan.

*5 IoT (Internet of Things): A network of various kinds of “things” connected to the Internet to exchange information. Specifically, it can be thought of as a system that processes information collected from a large number of sensors and devices installed in various places.

*6 HPCI (High Performance Computing Infrastructure): HPCI is a shared computational environment that connects the flagship “K computer” and other major supercomputers as well as storage in Japan via high-speed networks (SINET5) (http://www.hpci-office.jp).